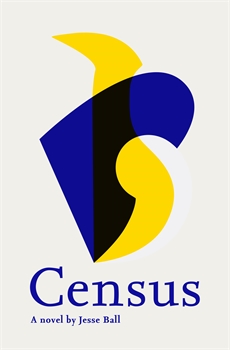 Census is what I’d call a light, experimental novel. There’s use of mixed media and a writing style that is concise and slightly anecdotal. I would say that there’s an element of Sebald in this particular book, maybe with a bit more heart though.

A widow has learnt that he is dying so as a last move, he decides to sign up as a census taker and go on one last trip with his son before he gets his neighbor to take care of him. In the introduction Ball states that the son is modeled after his brother, who had Downs Syndrome, however in the book it is not mention but I think it is safe to work on the assumption that the son does have the same condition.

Morality is the main theme of Census. The main protagonists visit U.S. cities in alphabetical order, thus chapter one is A  chapter 2 is B. Each city has someone who reminds the unnamed narrator of the fact that he will die soon. Between these meditations, there are sections about a book that the narrator’s deceased wife wrote about Cormorants and us readers find out about the narrator’s and wife’s past jobs and lifestyle.

By the time Z arrives, there is a full eulogy about the narrator’s son and the eventual death.

Despite the overly pessimistic tone, Census is a surprisingly zippy read. Also Ball does not hammer in the themes of death, the outcome is a poignant, touching novel. Yet is also one that is playful in outlook and a joy to read. For those who say that post-modernism is just style over substance, I am glad to say that Census balances both with panache.

Thanks to Granta for providing me a copy in exchange for an honest review.