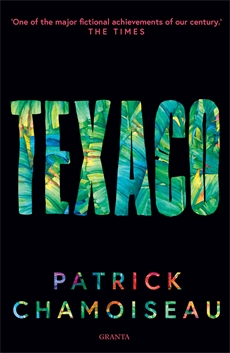 Texaco begins in an epic way: A land contractor arrives in a Caribbean town called Texaco. Instantly not only is he hit by a rock but his arrival is told through four perspectives, including the narrator. A few pages onward and us readers find out that the contractor intends to raze Texaco as it is an eyesore. The narrator of the book then decides to relay the history of Texaco.

Judging by the first chapter the reader knows that this is going to be a big novel, and it is. Think of Gabriel Garcia Marquez’s 100 Years of Solitude, except more readable and less confusing. Throughout the novel we see the beginnings of Texaco from it’s founder, a slave who is favoured among the landowners and manages to escape, befriend a carpenter and build a city to his daughter, the actual founder of Texaco and matriarch to the community. Destinies and characters weave in and out of the narrative but Texaco (the novel) ties up every single loose end into a tight story.

Obviously the novel is not as straightforward as that; race, the notion of slavery and complex relationships dominate Texaco alongside zombies, ghosts, magical musicians and more gentle hints of magical realism litter Texaco. By the end of the novel, the reader even gets a postscript written by the person who collected all the stories and notes about Texaco.

Despite the complexity of the book, it is readable even humorous in places and, more importantly, the translation is fluid ( in fact the translators state that they had to rewrite the book) I can totally understand why Texaco won the 1992 Prix Goncourt. Incidentally this reprinting is part of a new initiative form Granta Publishers to bring back more obscure and interesting texts in print. All I can say is that Texaco is definitely a classic that should not be missed.

Many thanks to Granta for providing Texaco in exchange for an honest review.