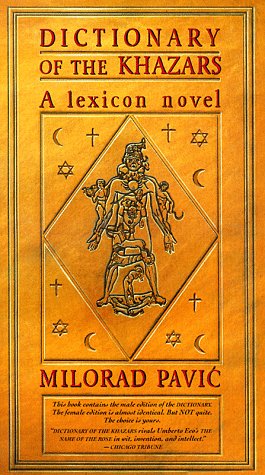 It’s funny how experimental novels either a) super engaging reads  (cf Umberto Eco , B.S. Johnson or Ali Smith) or b) fail completely ( a lot that are featured on this list). Dictionary of The Khazars falls between the two. Also as a small disclaimer ; I received the male version of this book as the female one was unavailable at the time.

The Dictionary of the Khazars is a detailed history of the Khazar race. However the trick is that the novel takes the form of Dictionary entries so as you read each entry you get a an idea of the Khazars story and all the bit players. To make matters more interesting the book is divided into three parts : A Christian , Muslim and Jewish view of the Khazar people AND the making of the dictionary itself (there’s a huge homage to Eco here).

In some parts I had a lot of fun piecing things together , plus Pavic adds a lot of interesting surreal moments , but I felt that in places the plot runs dry and that the author was trying way too hard to be different. I wouldn’t say that this is a failed experiment but rather a curate’s egg of a book.