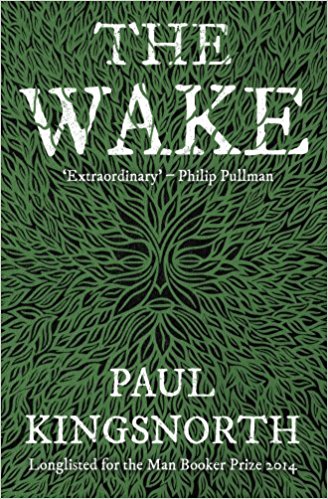 I would have never believed that I would enjoy reading a book taking place during the Norman invasion of Britain AND it’s told through a modified form of Old English.

The Buccmaster of Holland is living well. He has two sons, a lot of land, a huge house and a loving wife. Then after the Battle of Hastings, he loses everything and decides to put together a band of mercenaries to kill all French citizens.

However there are some problems, the main one is that The Buccmaster is stuck to the old ways i.e believing in pagan gods and old fashioned rites and refuses to keep up with the the current (1066) mentality of his kinsfolk, coupled with a dodgy past which is revealed slowly throughout the novel and you have got a riveting read.

Whilst reading The Wake I couldn’t help comparing the Buccmaster’s attitude to last year’s ‘Brexit’ campaign. Think of this. One person does not want foreign people in England in order to keep it pure and tries his utmost to get rid of them. Sounds familiar? I do understand that the Norman Invasion was a time of rape and pillaging but there are some similarities with the mentality.

A good number of reviews seem to point out the language but honestly after a couple of pages the language becomes poetic and fun to read, there is a glossary for the more obscure words and Kingsnorth does give an explanation on pronunciation so reading The Wake is not a chore. If one can cope with books such as Trainspotting or A Clockwork Orange, even Shakespeare then there’s no reason why this book should be a turn off.

The blurb of my copy states that The Wake could easily become a modern classic. Although such statements bother me, I have to agree with this one as it hits all points: creative, slightly funny, dashes of mythology and pagan rituals, and more importantly, a strong story.